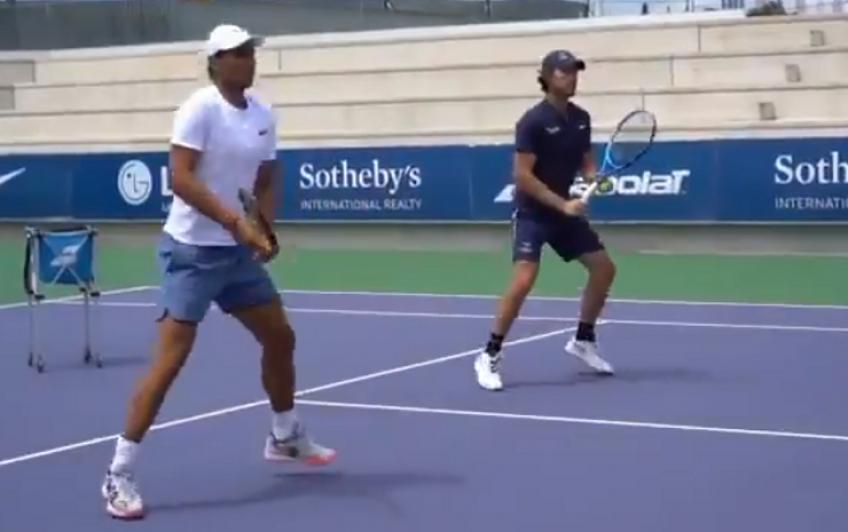 On Twitter, the Rafa Nadal Academy by Movistar page shared a video during which Rafael Nadal plays with his students, together with his coach Carlos Moya. The tweet in fact reads these words: "The game begins, Rafa Nadal and Carlos Moya against the whole Academy!

Who will win?" A nice way to demonstrate how important is the relationship with his students for the Spanish champion, who because of the many seasonal commitments he cannot cultivate continuously. Precisely for this reason, taking advantage of the suspension of the official Tour tournaments caused by the global pandemic, Nadal is spending a lot of time inside the Academy of Manacor, the Spanish city of his origin located on the island of Mallorca.

Already in the past, during the lockdown time, Rafael Nadal had posted videos of his social accounts to show how close he was to his students, precisely in those moments when they were all closed at home waiting to be able to come back to train and study.

Now the Academy has reopened but not yet at full capacity, considering all the safety rules to be respected.

The boys were excited to confront two players like Nadal and Moya, both number one of the world despite in two different eras.

The two Spanairds wrote the history of the Game, for their country and for tennis, and the student of the Academy had an unforgettable day. Short doubles-matches were played, allowing all young aspiring tennis players to measure themselves against their idols, striving hard to win a point, demonstrate their skills before the eyes of the two tennis players and perhaps celebrate with a perfect Vamos Nadal style.

At the same time, the young talents that are forming within the structure wanted by Nadal, have measured themselves on other fields with the Spaniard Jaume Munar, number 105 of the ATP ranking but with great margins for improvement, and with the Frenchwoman Caroline Garcia, who for some time have decided to train right inside the Rafael Nadal Academy, in view of the return to official competitions.

Nadal is expected to come back on the court for the Western and Southern Open and for the US Open, in Flushing Meadows, although his presence in New York is still in doubt. He will certainly play at Roland Garros and in the two ATP Masters 1000s in Madrid and Rome, just before the Parisian Slam.

The players of the RNA enjoyed a very special opportunity getting to play doubles against Rafa and Moyà in an unforgettable dayâ€¼ï¸ VAMOSâ€¼ï¸ pic.twitter.com/EBGOg5qmQn — Rafa Nadal Academy by Movistar (@rnadalacademy) June 29, 2020