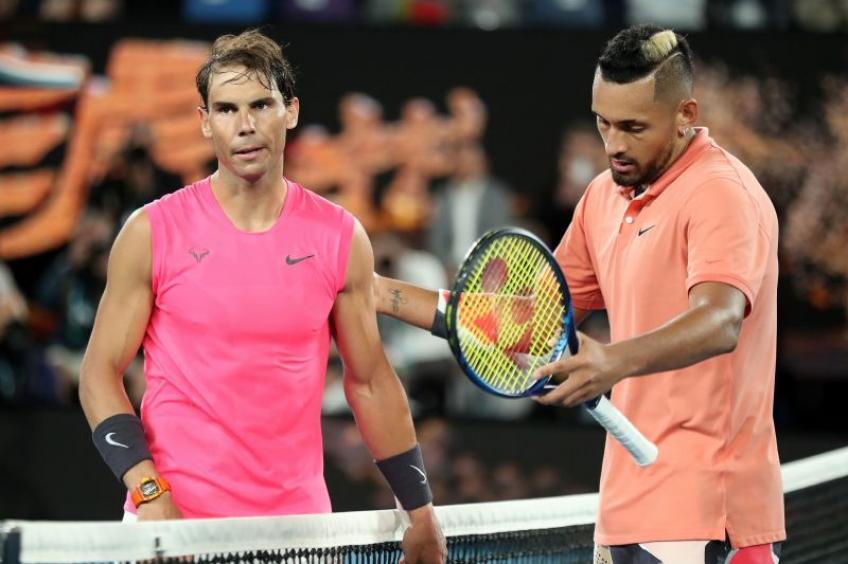 Nick Kyrgios and Rafael Nadal are certainly not great friends in the tennis circuit and several times they have had verbal and social confrontations where each claimed not to appreciate the other's behavior. Recently, however, things have changed a bit with the Australian who tried to moderate his tone and stopped particularly attacking the Majorcan tennis player.

Especially as regards the results, it seems quite improper to attack a tennis player with 13 titles at Roland Garros and 20 Grand Slam titles and probably Kyrgios himself, often fickle, however, especially in the social world, has realized this.

Currently the talented Australian tennis player is off the Tourbut nevertheless does not disdain to comment on what is happening in the world of tennis. Nick recently made interesting statements in NBA Australia's Courtside Huddle program.

Among others, besides praising his true idol Roger Federer, Kyrgios praised Nadal's achievements. Here are his statements: "Rafael Nadal is simply an incredible player. I literally saw him dominate at Roland Garros, but despite the adverse conditions and strong opponents, all this did not surprise me.

Roland Garros is Rafa's home ground and he loves playing on those courts. From my point of view we will never see anyone else do what Rafael Nadal did, no one will be so dominant on a single surface." Nadal and Kyrgios have clashed in the past in Acapulco and Wimbledon tournaments, but the Australian continued to like Rafa's work and stated that Nadal is the best tennis player of this tennis era.

In this regard, Kyrgios said: "Federer for me is the most dominant tennis player ever, he is the GOAT but at the same time I must say that Rafael Nadal is the best tennis player of this era. What he did on these fields will remain etched in history of tennis." Rafael Nadal, Roger Federer and Novak Djokovic have dominated the world of tennis for over a decade and indeed about two decades and have probably led to seeing the 3 best tennis players in history in the same era.

The Grand Slam race among these 3 phenomena has fascinated fans for years now and at this moment Nadal and Federer are driving with 20 Slams in front of Novak Djokovic's 17. About the Slam Race, In these days Novak Djokovic is playing the ATP 500 in Vienna, while Rafael Nadal should get a wild-card for the ATP in Sofia.