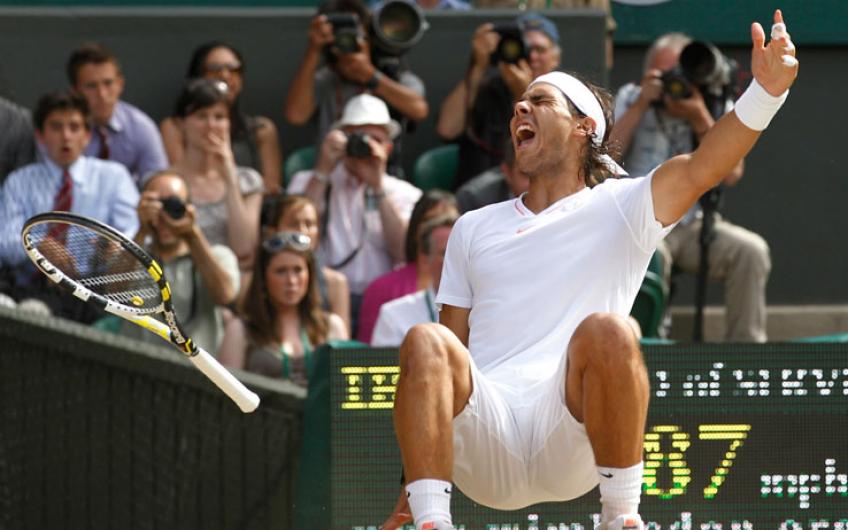 The Spaniard topped the Swiss in a memorable final for his first Major crown outside Paris, hoping for more of the same in the years to come. Rafa had to skip Wimbledon in 2009 due to an injury, making a strong return in 2010 and lifting the second title in the cathedral of tennis in three years.

For the first time since 2002, Roger Federer didn't make an appearance in Wimbledon final, losing to Tomas Berdych in the quarters and allowing the Czech to fight for the trophy against Rafa. Nadal had to work hard in the early rounds to remain on the title course, prevailing over Robin Haase and Philipp Petzschner and playing on a high level against Robin Soderling and Andy Murray to reach the fourth consecutive Wimbledon final.

With his vast experience in notable matches, Rafa was the favorite against Tomas and proved that on the court, notching a 6-3, 7-5, 6-4 triumph in two hours and 13 minutes for the eighth Major crown at 24. They had a similar number of winners and unforced errors, with Nadal forcing more than 40 mistakes from the opponent to control the pace and seal the deal in straight sets.

Rafael Nadal on that Wimbledon final

Rafa said he was nervous before the encounter, knowing he is the favorite and playing solid tennis to earn the trophy after better performance in the shortest range up to four strokes.

After six comfortable holds on both sides, Nadal drew first blood with a break at 15 in game seven, earning another one at 5-3 for the most reliable start. Serving at 5-6 in set number two, Berdych sprayed a forehand error to suffer a break at love, falling two sets to love behind and pushing Rafa closer to the finish line.

Returning at 5-4 in the third, the Spaniard placed a perfect forehand crosscourt winner to grab a break and celebrate the title, an emotional one after having to skip Wimbledon in the previous year: "In that final, I was very nervous before stepping on the court.

Tomas was very prepared and, although I knew he is a great player, I felt I was the favorite. I knew that if I played well, I would win that final. That generated that pre-match tension for me. It was not an excellent encounter, far from it, but I did what I had to do in the pivotal moments.

I took advantage of my opportunities, playing solid tennis and never losing my serve. I made no mistakes, that's what I had to do on that day. Also, I was more experienced than him in matches like that; that also helped me," said Rafa.