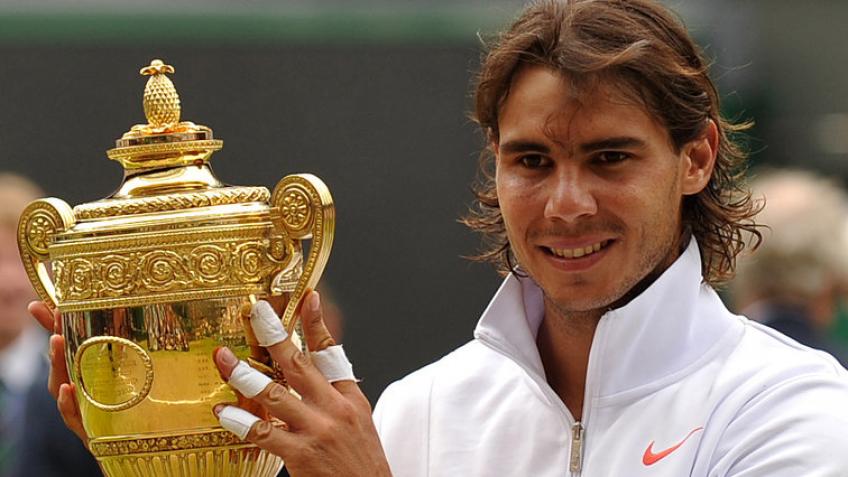 Rafael Nadal won Wimbledon two times in his career: in the unforgettable 2008 final against Roger Federer and in 2010 against Tomas Berdych. For the Spaniard to win Wimbledon two times, with its traditions, the amazing grass-courts, the iconic beckground, was special.

Rafa feels honored for winning two Wimbledon titles in, playing amazing challenges during the years at Church Road. When Rafa was only 16-year-old he had more serious plans at the beginning of 2003 comparing to his peers. He reached the final of Hamburg Challenger to crack the top-200, continuing his incredible journey towards the very top of men's tennis.

Then tehy came scored 19 Challenger wins in the first three months of the season to find himself inside the top-150, earning five ATP wins in Monte Carlo, Barcelona and Hamburg to introduce himself to the world of tennis.

Battling on the professional circuit since 2001, Nadal had played only two junior tournaments in his career and one of those came at Wimbledon 2002 when he reached the semi-final, losing to Lamine Ouahab in straight sets.

Twelve months later, the Spaniard was ready to make his professional debut on grass, playing his first match at the sacred courts at the All England Club on June 23 against Mario Ancic. Rafa defeated the Croat 6-3, 6-4, 4-6, 6-4 in three hours and four minutes to become the third-youngest player in the Open era with a Wimbledon triumph after Boris Becker and Mats Wilander.

Rafa had just two aces, although he knew what he had to do against the player who toppled Roger Federer a year earlier, serving at 75% and winning 42% of the return points to break Mario five times from 16 opportunities.

The Croat created 14 break chances and converted only three, not enough for a more favorable result as he propelled the Spaniard into the second round. There, Rafa played against the anonymous Briton Lee Childs and notched a 6-2, 6-4, 6-3 triumph in just over two hours, becoming the youngest player in the third round since Boris Becker in 1985!

Nadal was the dominant figure on the return, taking 44% of the points in Childs' games and facing only four break chances, getting broken twice but earning six breaks on the other side to find himself in the last 32. World no.

11 Paradorn Srichaphan proved to be too strong, ending Nadal's dream run with a 6-4, 6-4, 6-2 win in under two hours, losing serves twice and breaking Rafa six times from 15 opportunities to send the youngster packing. It was an excellent week for the Spaniard who would ride on that wave to complete the season inside the top-50, setting eyes on even higher goals in 2004, still at 17.

"Each tournament has its unique charm. Wimbledon is different, because of its tradition and everything. Grass surface automatically makes everything a more beautiful experience. The Central Court is a special one in the world of tennis, and sport in general.

It was a privilege when I played there for the first time, and it is a pleasure every time you go to compete there. I was always very excited about winning Wimbledon one day, and I am lucky to have won it twice, "Rafael Nadal said.