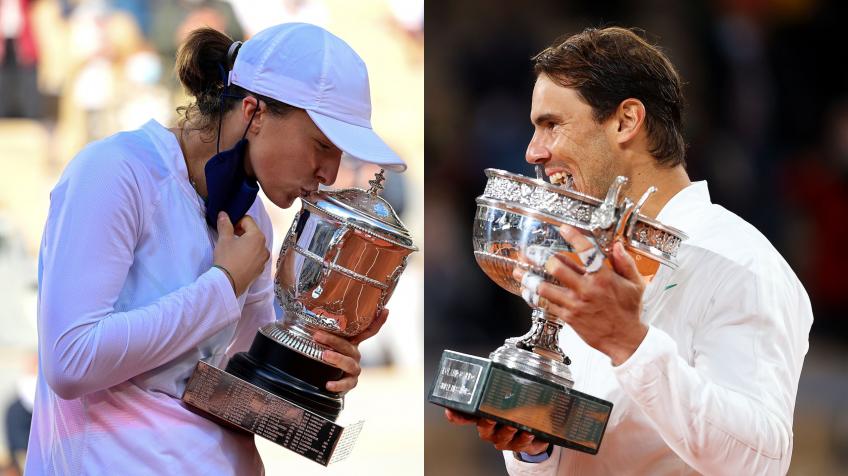 That the young Iga Swiatek is a big fan of the Spanish Rafael Nadal is certainly no secret: the two have also had the opportunity to talk to each other recently, following their respective triumphs on the clay in Paris. The coach of the Pole, Piotr Sierzputowski, considers the Majorcan to be much more affable and in the hand of his great rival Roger Federer, even though the latter is an undisputed legend of our sport.

Sierzputowski: "Here's the difference between Nadal and Federer"

As also told by Sportskeeda, the Swiatek coach said: "I understand why Iga is such a big fan of Rafa. He is a fantastic and polite guy who always greets you, winks and smiles.

It is never rude." Speaking instead of Novak Djokovic and Roger Federer, Sierzputowski said: “Nole is very helpful, there is no denying it. Roger is a legend, you can't hate him, but he will never be able to be loved as much as Rafa.

Federer is not where all the other players are, he disappears." Going back to talking about Nadal, the Polish coach continued: "Rafa plays team games with his team, sits with the other players, eats the same things as everyone.

Roger, on the other hand, has his own chef who always travels with him. These details make Nadal more likeable, more human, even if he is a machine on the courts." Iga Swiatek won her very first WTA title and first Major trophy in Paris, a few weeks ago: she defeated the American Sofia Kenin in the final.

The Pole's only other participation in Roland Garros was last year, when she managed to reach the round of 16 (defeated by Simona Halep). As for Nadal, the champion from Palma de Mallorca will try to win his first title in Paris-Bercy, Masters 1000 in which he reached only one final, back in 2007.

From Paris to Paris (this time at the Rolex Paris Masters 2020) without changing the result. As in the vast majority of cases, one would say. At the first under the roof of Paris-Bercy, Rafael Nadal still needs overtime to break down the resistance of Feliciano Lopez.