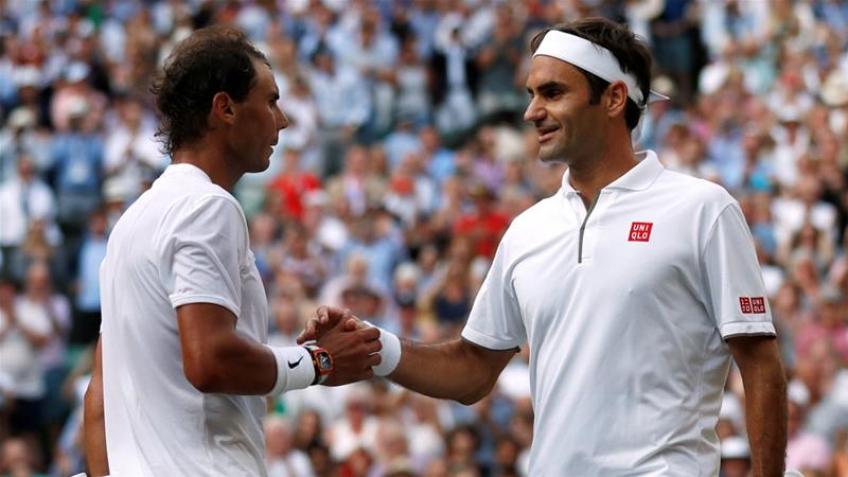 Rafael Nadal has never denied enjoying the challenges with Roger Federer, especially in Wimbledon. The Spaniard and the Swiss played three finals at the All England Club: Federer won in 2006 and in 2007, Nadal the legendary one of 2008.

Roger and Rafa met for the fourth time at Wimbledon, the first since that epic clash in 2008 when Nadal prevailed in five sets to lift the title. This time, it was all about Federer, who threw everything he had on the rival to keep the points on his racquet and unfold the rallies in the way he wanted.

Defending his backhand correctly, Roger avoided slices and lengthy exchanges to hit in full throttle, taming his shots nicely and overpowering Nadal in sets three and four to book the final against Novak Djokovic, the first since those two clashes in 2014 and 2015.

Eager to go at least one step further than a year ago and advance into the first Wimbledon final since 2011, Rafa gave his best in sets one and two, dropping a tight opener and having the upper hand in the second to level the overall score.

The Swiss had 51 winners and 27 unforced errors, leaving Rafa on a 32-25 ratio and playing better on the return, which gave him the crucial advantage. Both players converted two break chances and Federer delivered those in the more critical moments, celebrating the 101st victory at the All England Club.

In the opening set, Federer had the advantage in the mid-range exchanges, with only one break point in the entire set that Rafa saved in the eighth game, setting up a tie break where Roger rattled off five straight points for a 7-3.

What Rafael Nadal said about clashes with Roger Federer

In set number two, they both repelled break chances in games two and three, with Nadal taking charge after that to grab five straight games and leave Federer far behind.

The Spaniard returned almost every Roger's serve and claimed 60% of the return points, scoring breaks in games four and six and gaining a massive momentum ahead of set number three. Starting from the beginning, Federer was thundering again, hitting 15 winners and two unforced errors and breaking Rafa in game four to forge the advantage that he carried home with a hold at love in game nine, moving closer to the finish line.

The Swiss broke again in the third game of the fourth set to forge the advantage, wasting a match point on Nadal's serves in the ninth game. Giving his best to prolong the battle, Rafa created a break opportunity in the tenth game, denied by Roger who clinched the thrilling game to join Novak Djokovic in the final.

Recently, Rafa said it was nice to meet Roger at Wimbledon again, praising the rival and his abilities for delivering aggressive and sharp tennis. "It was nice to play Roger Federer again at Wimbledon. The rivalries over the years are valued differently, we both know what our matches have represented for the world of tennis and what it means to face now.

We talked before the tournament because we are together in the Players Council, and we are usually in contact, but before the game, it is not usual to talk too much. I lacked a bit of pace that day, he played very aggressive and brave tennis, at speed challenging to follow.

I was not at the level of the previous matches either but he was better than me; he was just the winner. Playing against Federer is always special, especially on a stage like this," said Rafa.