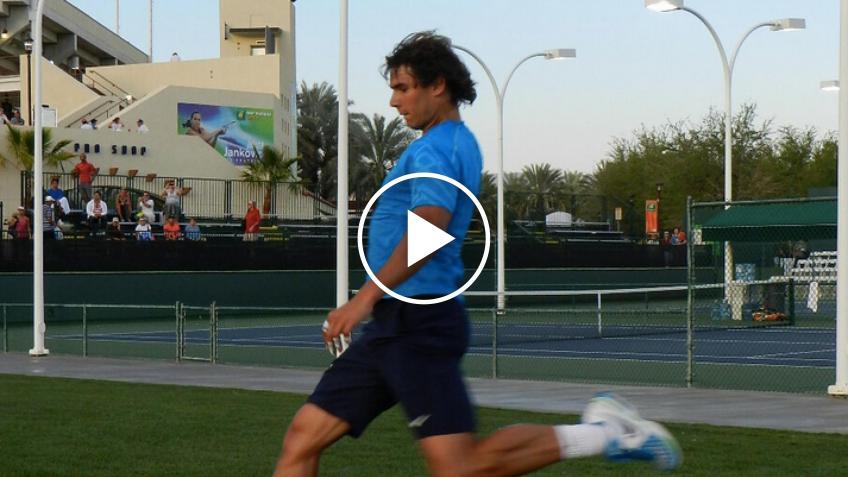 Rafael Nadal is one of those athletes that any sport you propose him to do certainly does not look bad. He loves sport, especially football and whenever he gets the chance, he shows off all his technical skills. Except that instead of doing it with a normal soccer ball, the Spaniard enjoys using the tennis ball.

And you certainly don't need a mathematician to guess how more complicated it is to manage dribbles with a ball ten times smaller than a regular soccer ball. Anyone who has tried to dribble with a tennis ball knows the difficulty of performing so many dribbles in a row.

For the 19-time Grand Slam champion it seems not to be the case. The naturalness of the dribbles could be confusing and lead the observer to believe that Rafa plays football instead of being the strongest tennis player in history on clay.

The Manacor champion has accustomed us to this type of performance, it is not the first time that he has enjoyed playing football using the tennis ball. In the past he has also done it with other tennis players such as Dominic Thiem.

Nadal also a phenomenon in soccer with dribbles during training

This time, as seen in the video posted by ESPN on Instagram, Nadal also dribbles from the shoulder, showing truly enviable ball control. Images have made the boom in views.

The video was seen by over 200,000 people in just a few hours. Nadal also returned to playing tennis in an official tournament after the lockdown in Rome, but from how he ended his first matches against Carreno Busta and Dusan Lajovic, it seems that he never stopped.

The Spaniard aims to win the title for the tenth time at the Italian Open where he is reigning champion. He will then fly to Paris to attempt the attack on Roger Federer's Grand Slam record, and win his thirteenth Roland Garros, which will be staged from 21 September to 11 October.

On the Rome clay-courts, Rafael Nadal was defeated by Diego Schwartzman in quarterfinals of the Italian Open 2020. The Argentine tennis player plays a set in heaven and in a match of quantity and quality, with thirty-one winners and just seventeen unforced errors, and he pushes to 6-2 7-5 when the clock has just passed two hours.

It is not an approximate Nadal, on the contrary, but a Nadal who still concedes something near the finish line. When twice he has the opportunity to put his head forward, for example. The Spanish champion prematurely renounces the appointment with the ten title at the Foro Italico and above all the overtaking of ATP Masters 1000 titles against Novak Djokovic.

Schwartzman will challenge Denis Shapovalov for a place in the final.