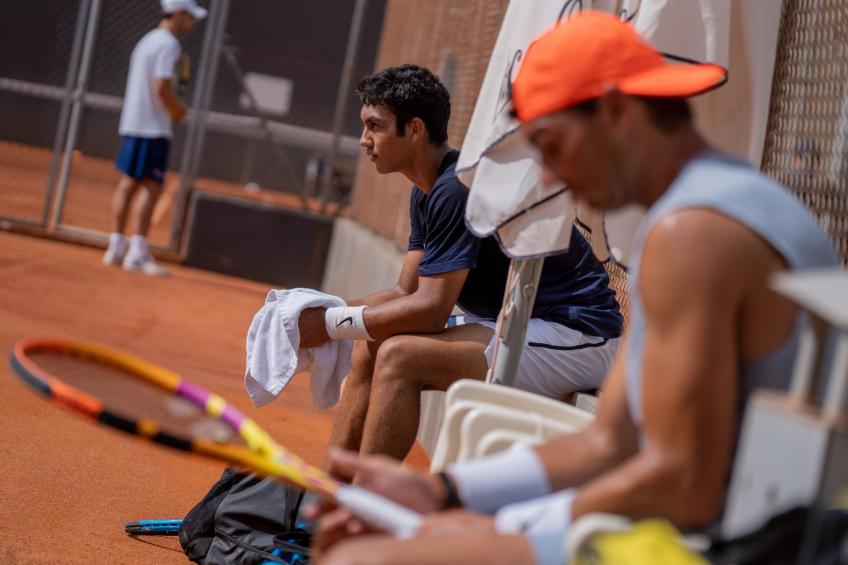 Rafa Nadal Academy has posted a video of the World No. 2 Rafael Nadal training with young Spanish player Daniel Rincón, who trains at the Academy. The training session was overseen by coaches Carlos Moyá and Tomeu Salvá.

He also won the doubles event there with Abedallah Shelbayh, another player who trains at the Rafa Nadal Academy by Movistar. The 17 year old Rincón is currently ranked No. 149 in the junior ITF rankings.

Rafael Nadal on the upcoming months

Talking about the come back of the tennis Tour, Nadal says he is continuing to train at his academy and preparing for the return of the circuit.

“I am working at my academy every day and preparing for what may come. Tennis is in a very complicated situation, since it involves people from all over the world. We are waiting for events and hopefully this nightmare will end soon and we can return to the life we â€‹â€‹have known." Rafael Nadal has won 19 Grand Slam singles titles, the second-most in history for a male player, as well as a record 35 ATP Tour Masters 1000 titles, 21 ATP Tour 500 titles and the 2008 Olympic gold medal in singles.

In addition, Nadal has held the world No. 1 ranking for a total of 209 weeks, including being the year-end No. 1 five times. Nadal has won a record twelve French Open titles, four US Open titles, two Wimbledon titles and one Australian Open title.

Rafael Nadal is known to be a big fan of the soccer club Real Madrid and said he was very happy after the club won their 34th league title with a win over Villarreal 2-1. Rafael Nadal has been a fan of the club since his childhood days and he has a history with the sport in his family as well with his uncle Miguel Angel Nadal being a defender for FC Barcelona and the Spanish national team.

Talking to Real Madrid TV, Rafael Nadal, great supporter of Real Madrid CF, talked about the 34th victory of the Spanish La Liga of his beloved club: "For me it is a good example of overcoming (challenges), passion for what you do and commitment to your profession.

When the players have been at home they have fulfilled their routine, because they have returned in a great state of form, which is more complicated than when you are in a group. I personally lived a very happy day yesterday because of the title." The Spaniard did acknowledge that it was sad that the victory could not be celebrated with fans but adds that the same is required in the current situation: “Without a doubt it is a title that, within that it is a very special League title, has a superior merit to many others for all the adversities that have arisen.

It is also somewhat bittersweet because it cannot be celebrated with the fans and we experience situations that are very sad in many ways. People are aware of the situation we are in and that we cannot relax. Hopefully we can celebrate the joys with our people in a short time."