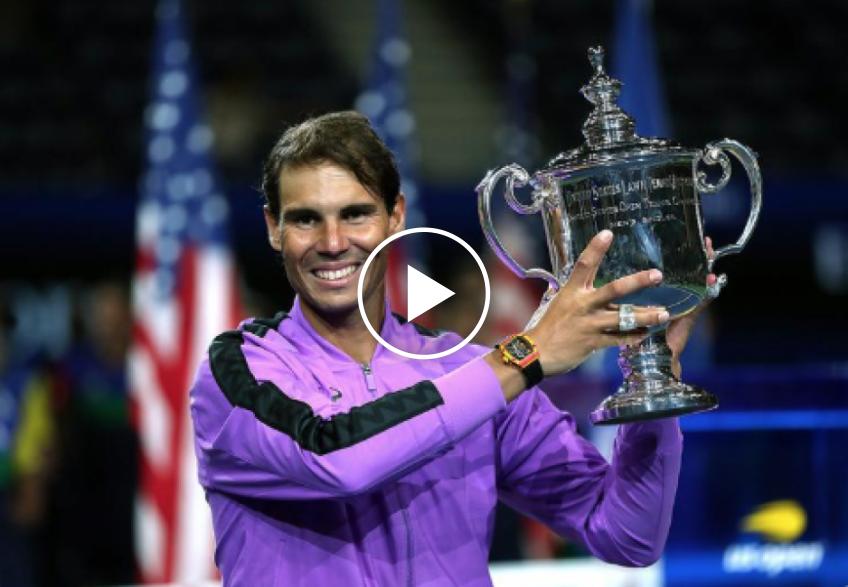 This year Rafael Nadal's presence in New York is in doubt: he could skip both the Western and Souther Open and the US Open, if they will be played, and directly play the clay-season in Europe, and try to match Roger Federer's Slam record by winning the Roland Garros.

However if Nadal will be there or not in New York, in this video we can review how he managed to win the US Open 2019, from the first round to the final. The whole world of tennis is waiting to understand if this year the US Open will be played or not, and if Rafael Nadal, defending champion, will be present at Flushing Meadows.

On the USTA Billie Jean King National Tennis Center of New York, the Spaniard won his last Slam, the 19th, beating Daniil Medvedev in the final after five exciting sets and after a real battle

The Spaniard is one of the strongest tennis players of all time. Rafa won19 Grand Slam titles and is only one title from the record of the Swiss Roger Federer. His enormous success is not only due to his great talent, but also and perhaps above all thanks to his great ethics outside the playing field.

As we know, the life of a sportsman requires great sacrifices and so much discipline that we do not see since everything is behind the scenes. Rafael Nadal's routine is fundamental and basically we also notice it from some small details during the meeting: the Spaniard must have the bottle of water and his towel in his place and before each service he must touch his hair, shorts and rubbing your nose, a routine we've been used to for over a decade.

In a recent live event on Facebook called #GetRafaMoving, a fan asked Rafael Nadal to choose his favorite opponent to play against. Rafa said: “My favorite opponents are one that I win against normally. Well, I don’t know, I enjoy the challenges to playing against Roger Federer of course, against Novak Djokovic, against Andy Murray, against David Ferrer.

I think there are a lot of great opponents and everyone gives you a different challenge and you need to adjust your game to be competitive. I don’t have a favorite opponent, I just enjoy the fact that every day we compete against a different one."